How much sleep does a footballer need?

It's easy to sit back and criticise footballers when things don't go to plan on the pitch. Whether they don't get to their opponents quick enough or they miss a penalty, we're all guilty of practically tearing our hair out during the World Cup - and we're not even past the group stages yet! However, in a game lasting for 90 minutes, with the footballers more or less always on the move, the players must need an awful lot of energy to keep going as they do. This got us wondering about the preparation that a footballer must undergo pre-match - what do they eat? How much do they train, and sleep? Hopefully, we've got the answer to some of those burning questions here.

As FIFA.com outlines, eating the right kind of meal before a big match is really important. The amount of carbohydrates can make the vital difference between a player feeling fatigued and full of energy mid-game. Though the lead up to the event is different for every player, most are sure to eat a carb-filled breakfast, such as cereal in milk with a large banana, or three slices of toast and honey. It's also crucial that players stay well hydrated, so they are sure to take care over their water and salt levels in the days leading up to the match, too. Relaxing The minutes, and even hours before kick-off can be a nerve-wracking time, especially in a tournament as huge as the FIFA World Cup. The trick to controlling this anxiety is in knowing how and when to relax, as well as working out what works best for the individual player. Many footballers have to learn the signs of their nerves and anxiety - this could be butterflies in the stomach, or more physical demonstrations like unwarranted perspiration, or a very dry mouth. Positive talk from their coach can often help, as can controlling breathing and light stretching, the BBC discusses. Sleeping There are few people that are better suited to talking about the amount of sleep that footballers need than England's World Cup striker Wayne Rooney. Speaking to FourFourTwo Performance, Rooney explains his sleep pattern and needs: “I try to get at least eight hours of sleep a night, plus an hour or two in the afternoon. To do your best in training, eight hours is fine. I’m not regimented about it. I can’t lie in bed and force myself to sleep. I’ll wait until I’m tired, normally about 11 or 12, then get up around eight. You do notice the difference if you can’t sleep for that long, which is normally after a night game. You don’t get home until 12 and can’t sleep until about four. Then you’re tired the next day and you can feel it in your performance.” 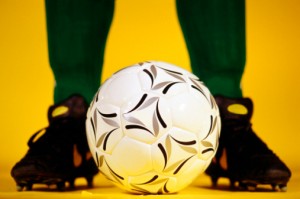 How much sleep does a footballer need?