Being a student is hard work… in terms of sleep, that is. Studying all day and partying into the early hours equates to not much time beingspent in bed sleeping. Naturally, this eventually begins to take its toll on the body. So, whilst studying in the often quiet and relaxing space that is the library, students have been known to doze off. Aside from wasting valuable study space, this hasn't been too much of an issue until now. However, The Corsair – the Santa Monica College student paper – has reported thefts in which students have awoken to missing laptops, phones, and other pieces of technology. Some of the stolen items have been taken from an uncomfortably close proximity to their snoozing owners, yet the paper reported that local police officer, Sgt Jere Romano, stated that "a lot of people, for some reason, appear to be very naïve." These thefts do somewhat obviously raise concern about the university's library security, but perhaps more so over the awareness of the students. "People just get too comfortable and think that because it’s a school it’s supposed to be safe, but it’s not the school’s job to protect you," commented Erik Galeana, a Santa Monica College student. This raises an intriguing question about the safety of sleep, and the responsibility we have over deciding where a suitable place for that often needed afternoon nap is. Personal safety and accountability over our belongings ultimately comes down to us – so, next time you're feeling a bit sleepy, be sure to choose that snoozing spot carefully. 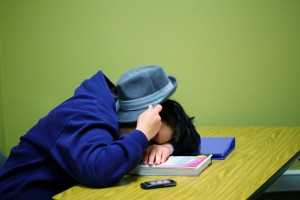