How Much Sleep Do You Need?

Sleep is a wonderful thing, when you can get it.

Those that struggle to sleep will be all too familiar with the issues not getting enough rest can cause. From feeling a little fuzzy-headed to a higher risk of developing medical conditions such as diabetes, the range of problems a lack of sleep can cause is simply huge.

As sleep can be such a minefield, we’re talking about all aspects of it, helping you get clued up on the facts.

In this article, we’ll look at just how much sleep you actually need, from birth right through to older adulthood. Read on and soak up that sleep knowledge.

How much sleep do babies need?

Unlike the rest of us, babies have a heck of a lot to do when they’re asleep. They’re constantly growing and developing, both physically and mentally, which means that sleep is so important when they’re young.

Advice from the National Sleep Foundation breaks down exactly how many hours babies should get according to their age. This is detailed as follows:

At this stage in their development, babies will sleep at various intervals throughout the day and night. Some may sleep in the day, and all through the night (good news for new parents), while others might sleep in small chunks, waking at various intervals (not so good news for new parents) – it all depends on the baby, and their individual habits.

For those with babies who don’t seem to stay asleep for a full eight hours, it often helps to take the opportunity to rest when they’re resting. NHS advice also recommends that you don’t need to worry too much about staying quiet when your little one has nodded off, it can be a good idea to get them used to, and capable of, sleeping while there’s some noise in the background.

How much sleep do children need?

As they get older, children start to lose the need for a daytime nap, and start to sleep for longer at night instead (in theory). From around three years old, you may start to notice the nap time reducing, and eventually giving way completely. However, parents are sure to notice the benefit of bringing back the nap on the odd occasion they haven’t slept well at night (that’s naps for parents as well as babies, of course).

According to the NHS, children (from three onwards) need the following amount of sleep:

Sleep is really important at this stage in a child’s life too. While when they’re babies they have a heck of a lot of developing to do, when they’re children, sleep helps them stay alert and switched on in the classroom, improves memory skills and generally helps them to soak up information much more easily.

It’s also important to help keep their immune system in tip top condition – children can be prone to picking up colds more easily when they haven’t been getting enough sleep.

How much sleep do teens need?

Contrary to how it may at first appear, getting enough sleep can actually be a challenge when you’re a teenager. At this stage, there’s plenty going on that can cause stress, such as exams, relationships, having to make big decisions about your future, and not to mention the changes in hormone levels – all of which can have a knock-on effect on how well teens sleep.

The NHS advises that from the age of thirteen onwards, teenagers need around nine hours of sleep a night.

According to Sleep.org, the difficulty teens have in getting those precious nine hours is down to the natural shift in their body’s sleep-wake clock that happens around this age. This is what’s to blame for their inability to get to sleep at a decent time, and why they might find getting up early really tough too!

This shift can sometimes lead to a bit of a sleep debt, which is why they’re likely to sleep in on a weekend. And although it might appear as though they’re being lazy, those weekend lie-ins can actually help them with their internal development, providing it’s just an hour or two’s lie-in, that is! 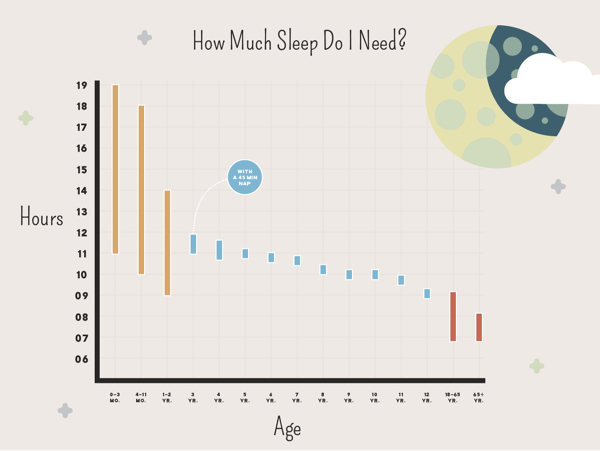 How much sleep do I need?

As an adult, while you may not need your sleep to catch up on certain developmental milestones anymore, you do need good-quality rest in order to restore, refresh, and protect yourself from the risks of periodically not getting enough sleep.

This can vary slightly as you age, just as it does in children and babies. Older adults need slightly less sleep, while younger adults can so with a little more.

The Sleep Council provides some handy general information on how this breaks down:

The Sleep Council also makes the valid point that as adults, our individual needs for sleep can vary depending on various factors, such as your health levels, age and sex.