Barack Obama tucks Michelle in at night as part of their bedtime ritual, his wife has recently revealed. The First Lady admitted in an interview with People magazine (due out June 4th) that she is usually in her double or king size bed 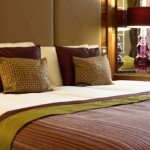 first, and that her husband comes in to spend time with her before she nods off. Michelle Obama said: "[Barack will] come and turn the lights out and give me a kiss, and we'll talk. He's like 'Ready to be tucked?' I'm like 'Yes, I am'." Mrs Obama also revealed that although she isn't musically gifted herself, she wishes she were as she is envious of the lifestyle musicians lead. "It looks like musicians just have the most fun," she told the magazine. Michelle is often highly praised for her great sense of style and the classic fashion choices she makes, but she will soon be revealing new talents. Her new gardening book, entitled American Grown, is set to be released at the beginning of June.